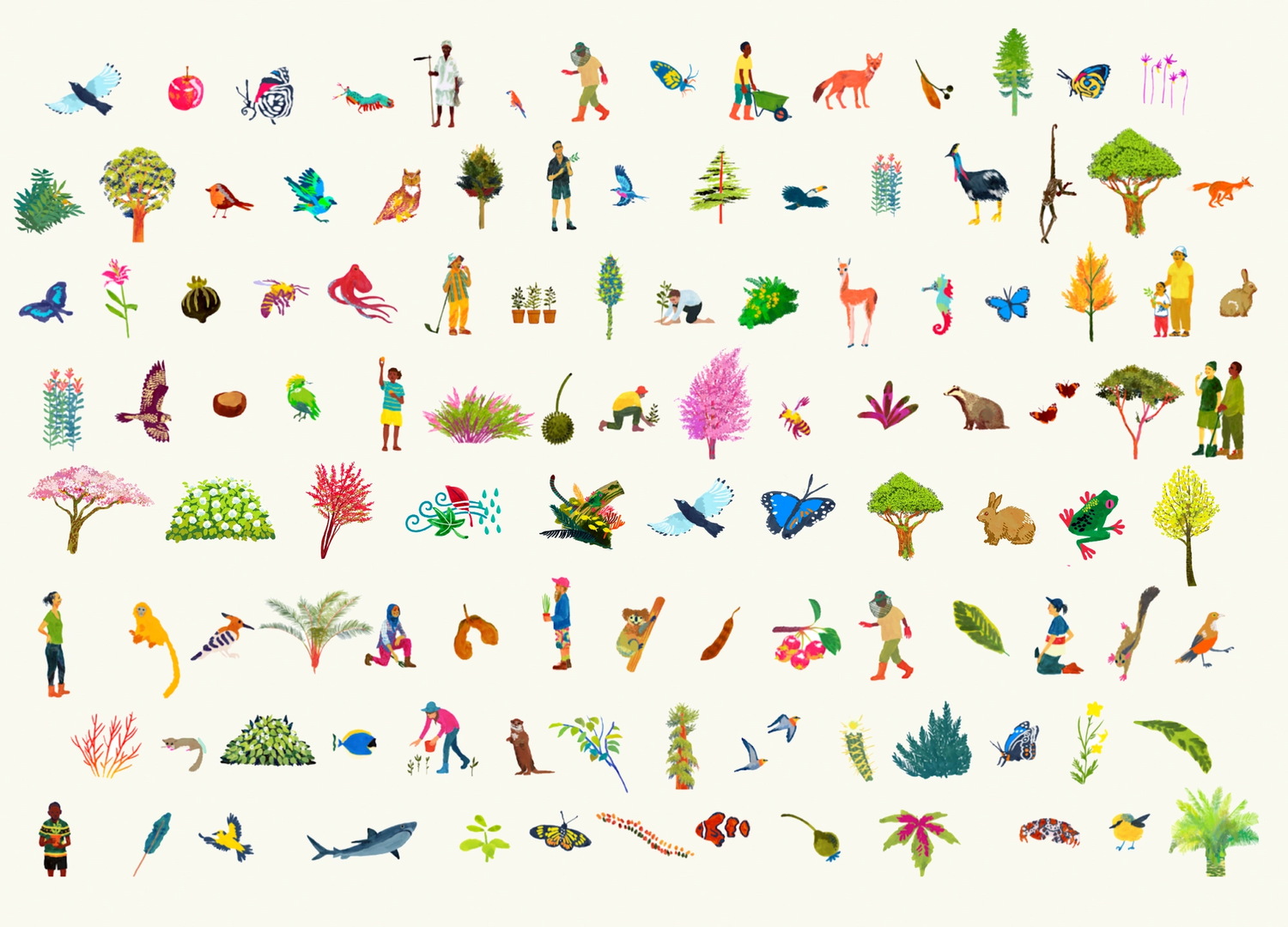 What is an ecosystem?

An ecosystem is a geographic area where plants, animals, and microorganisms interact with each other and non-living things to create a bubble of life.

The way the living parts of an ecosystem interact and have adapted is a reflection of and dependent upon the non-living components, for example, the amount of rainfall, temperature, or soil type an area might have.

Ecosystems are found within biomes. A biome is a large area characterised by the animals, plants and microorganisms that have adapted to the climate and landscape of that area. 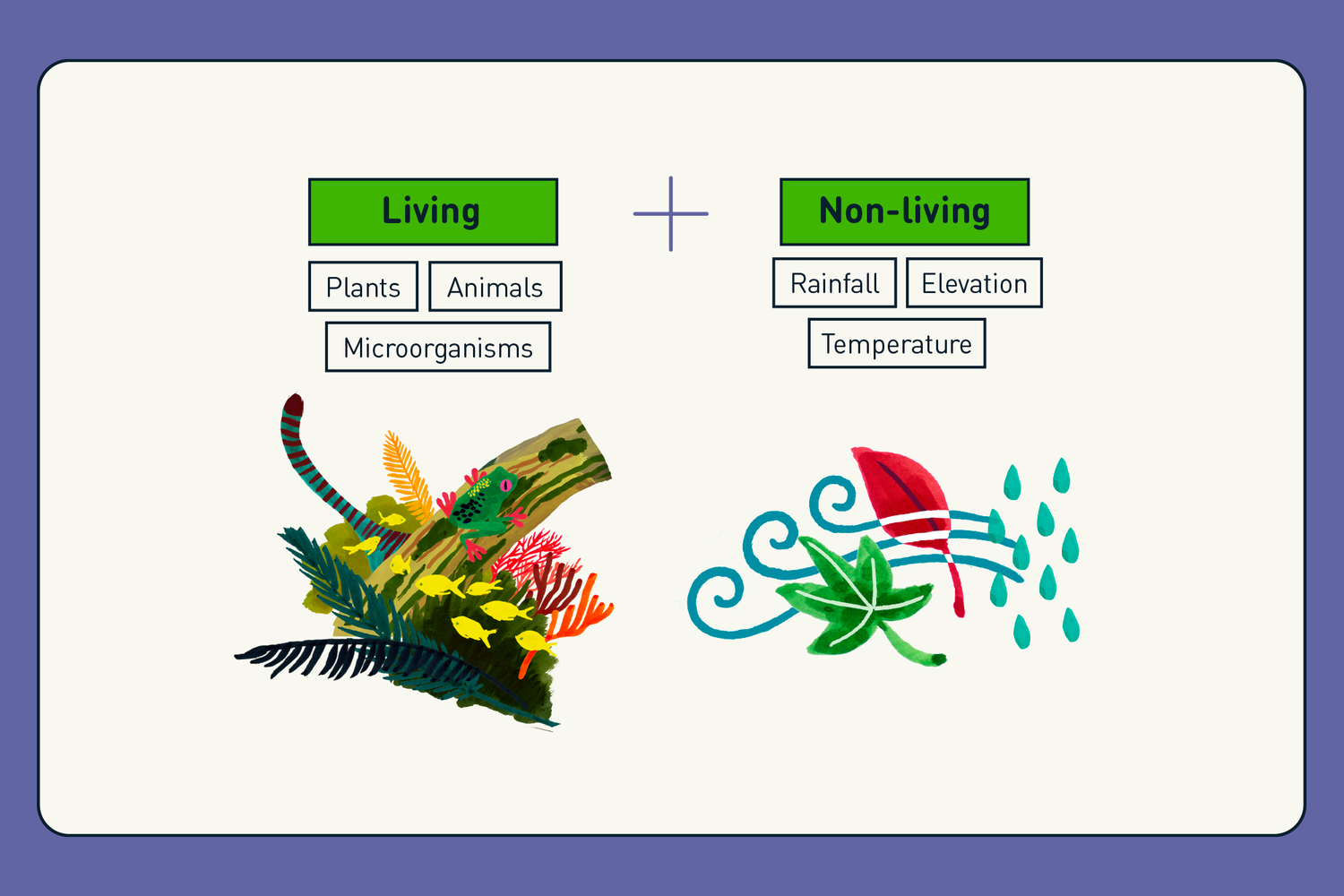 Not all scientists classify biomes in the same way. National Geographic lists six major biomes, freshwater, marine, grassland, forest, desert, and tundra. But these can be split into far more specific biomes, including human ones such as farmland and cities. WWF lists as many as 26: 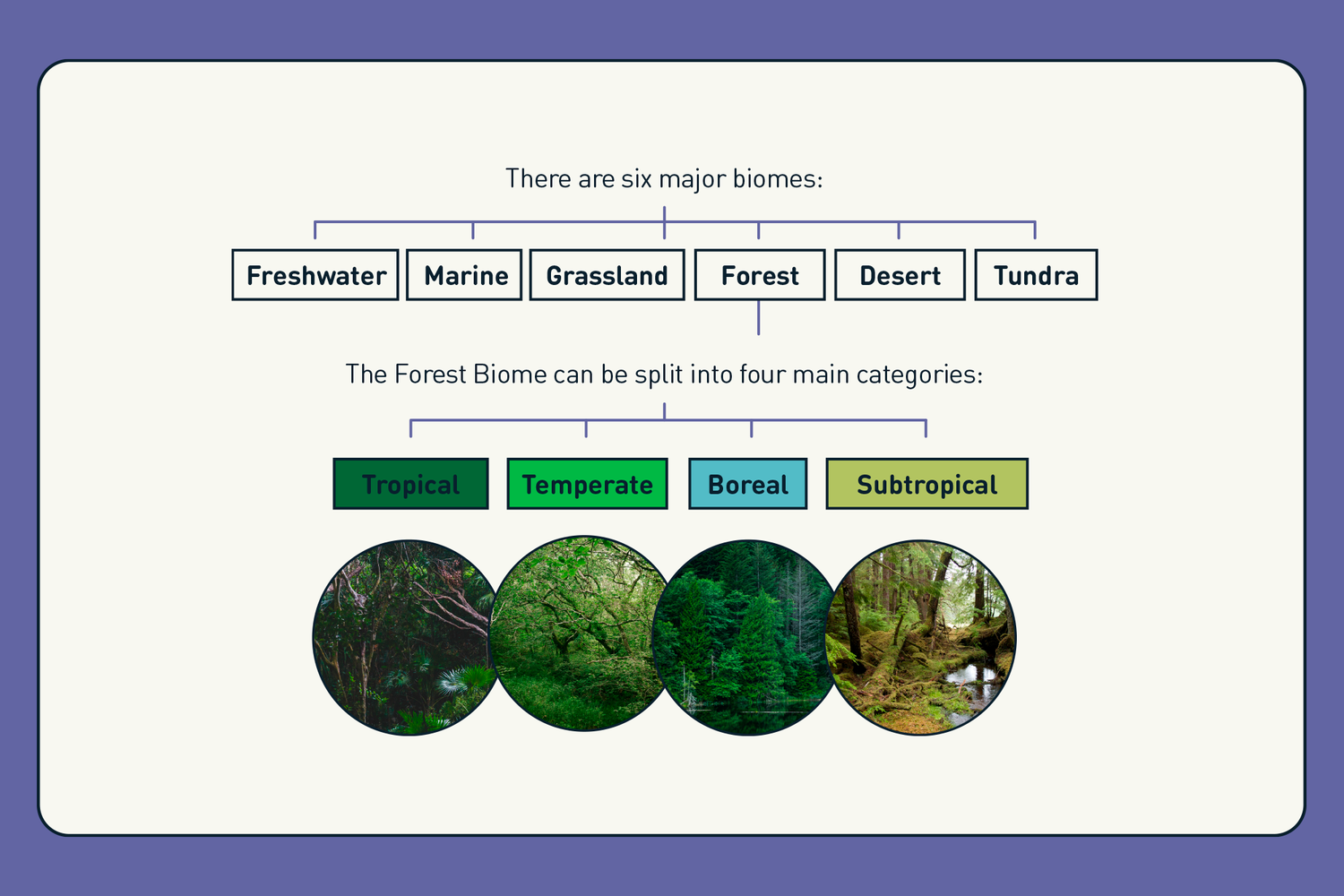 A biome is different from an ecosystem. While a biome is defined by the stuff that makes it, from the living organisms to the landscape and climate, ecosystems refer to the totality of relationships and interactions between these living and non-living things that make up a particular life bubble.

Within a biome, you will have a mix of smaller ecosystems working to form one overriding one. Ecosystems are interconnected, and inputs from beyond ecosystems can be powerful drivers for that particular ecosystem.

Biodiversity is needed for the health of an ecosystem

Biodiversity is needed for health and balance within an ecosystem—the more complex the structure, the greater its species diversity.

Ecosystems with greater biodiversity are more stable and resistant to harmful change. Every living thing within an ecosystem fulfils a unique function, working together to enable everything else to live. You need a diverse array of species to perform the different roles within an ecosystem. And it’s precisely these interactions and relationships between the plants, animals, microorganisms and non-living elements that enable ecosystems to flourish. Ecosystems need biodiversity and balance to be healthy.

As well as ecosystems and biomes, you also have habitats. A habitat provides food, water and shelter for the organisms that live within it. The more habitat or “resources” you have, the more resilient your ecosystem will be.

Did you know that the root of the word “ecosystem” actually comes from the Greek word “oikos,” meaning “household” or “place to live”? It’s useful to think of an ecosystem as a household. Just like species within an ecosystem, the members of a household work together to make that household a livable place for all.

Ecosystems are interconnected, just as households can link up to form a neighbourhood. Inputs from beyond ecosystems can be powerful drivers for that particular ecosystem.

Every factor in an ecosystem depends on another factor, which makes them very fragile. And as ecosystems are shaped by their climate, something as small as a change in temperature will affect what organisms can live there.

What is a forest?

There are more than 800 different definitions of a forest; however, deciding what label we use is critically important for the health of our environment. Why?

A forest is not simply “a terrestrial environment dominated by trees growing in a closed canopy”, but a community of diverse plants, animals and microorganisms all interdependent on each other for survival.

A forest is an ecosystem, and “Like all ecosystems, forests are really a mix of many smaller ecosystems working to form one overriding one, explains SUGi forest maker, James Godfrey-Faussett.

A forest would not be a forest without this highly complex interconnected web of relationships. By contrast, a monoculture plantation contains just one species. But the presence of just one tree simply doesn’t provide enough habitat for biodiversity to thrive, and without this biodiversity, there will not be enough balance of life for an ecosystem to function at its optimum.

Describing a monoculture plantation as a forest is seeing it simply for human needs and as a commodity rather than a community. 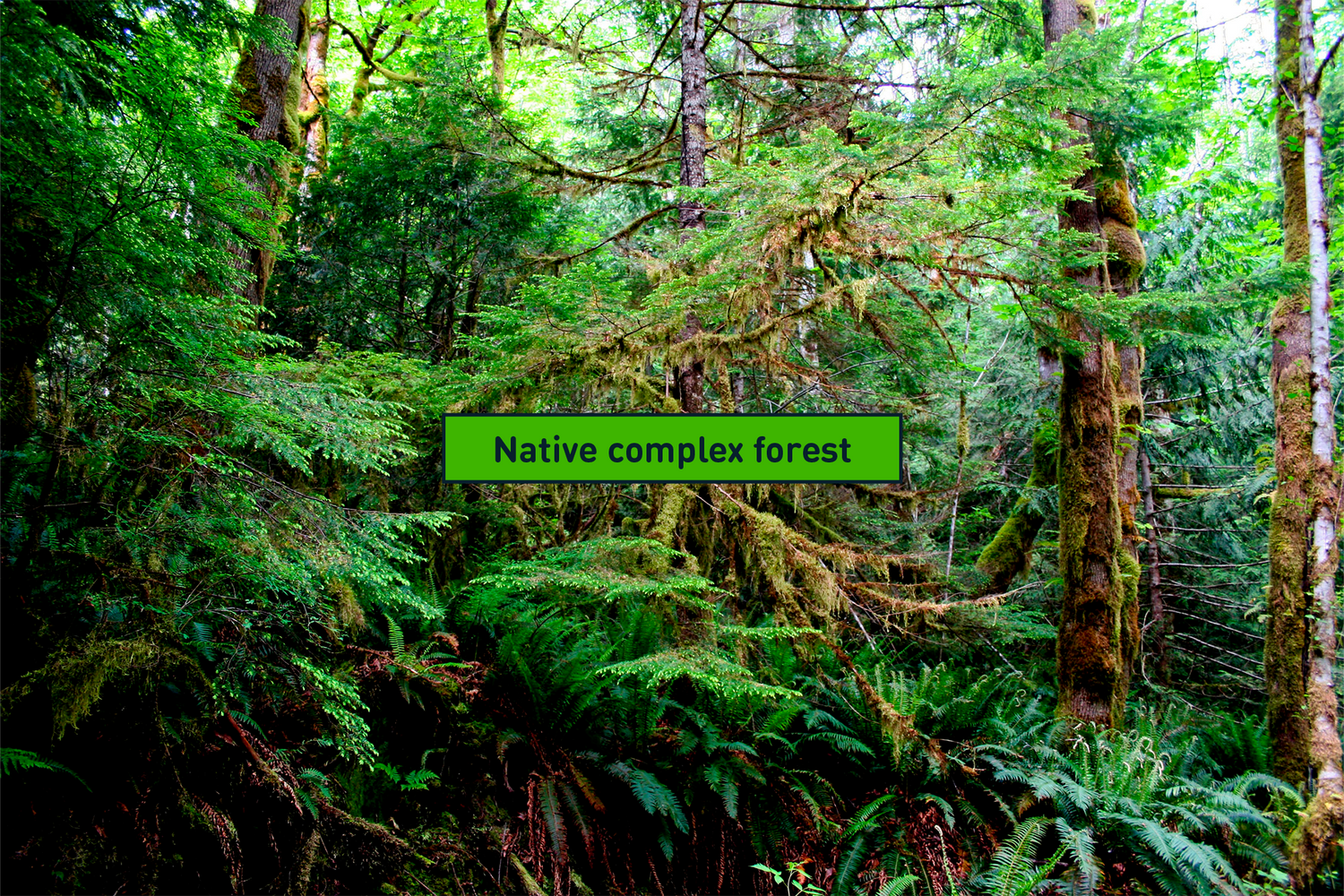 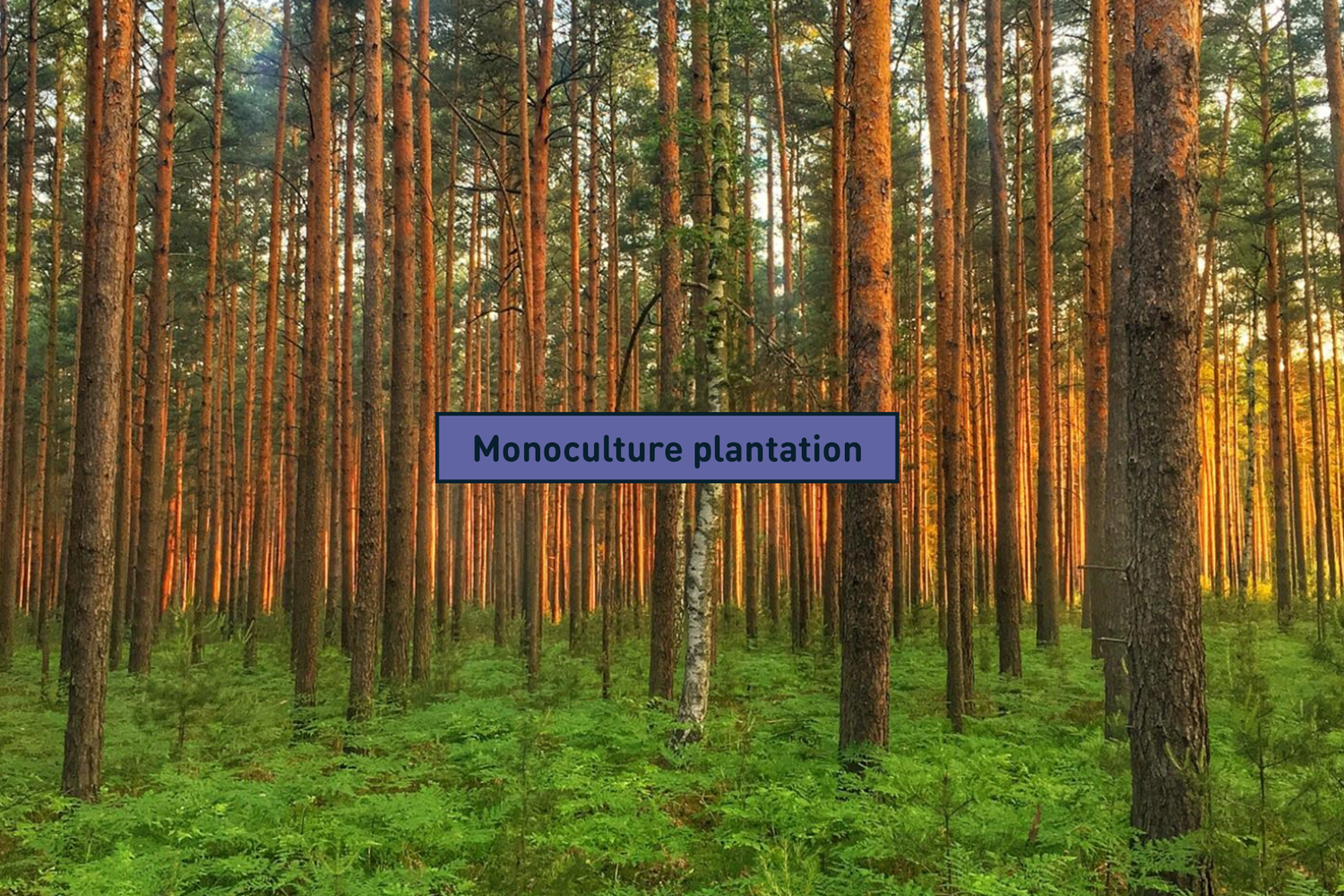 What is a forest biome?

Tropical forests are common in areas near the equator; they’re warm all year round and experience high rainfall. Subtropical forests are in areas outside of the strict equatorial region, but are within or bordering a tropical zone. These forests have more noticeable seasonal changes than tropical forests. Tropical mangroves are found in the tropics and subtropics.

Temperate forests are found across Eastern North America and Eurasia and are shaped by four distinct seasons; precipitation is abundant here and lends to fertile soil. Boreal forests are the world’s largest land biome and they can be found across Siberia, Scandinavia and North America. The temperature in these forests is often below freezing and the trees are predominantly evergreen.

Animals, plants and microorganisms have adapted to the climate and landscape of their particular biome, and the climate and environment shape how the non-living and living things interact with each other in ecosystems. For example, rainforests experience high rainfall and high temperatures all year round, so plants have adapted to have waxy leaves with pointed tips. The water runs off these leaves and doesn’t weigh them down. As rainforests experience warmer temperatures, the trees have bark that is smoother, with less surface area. 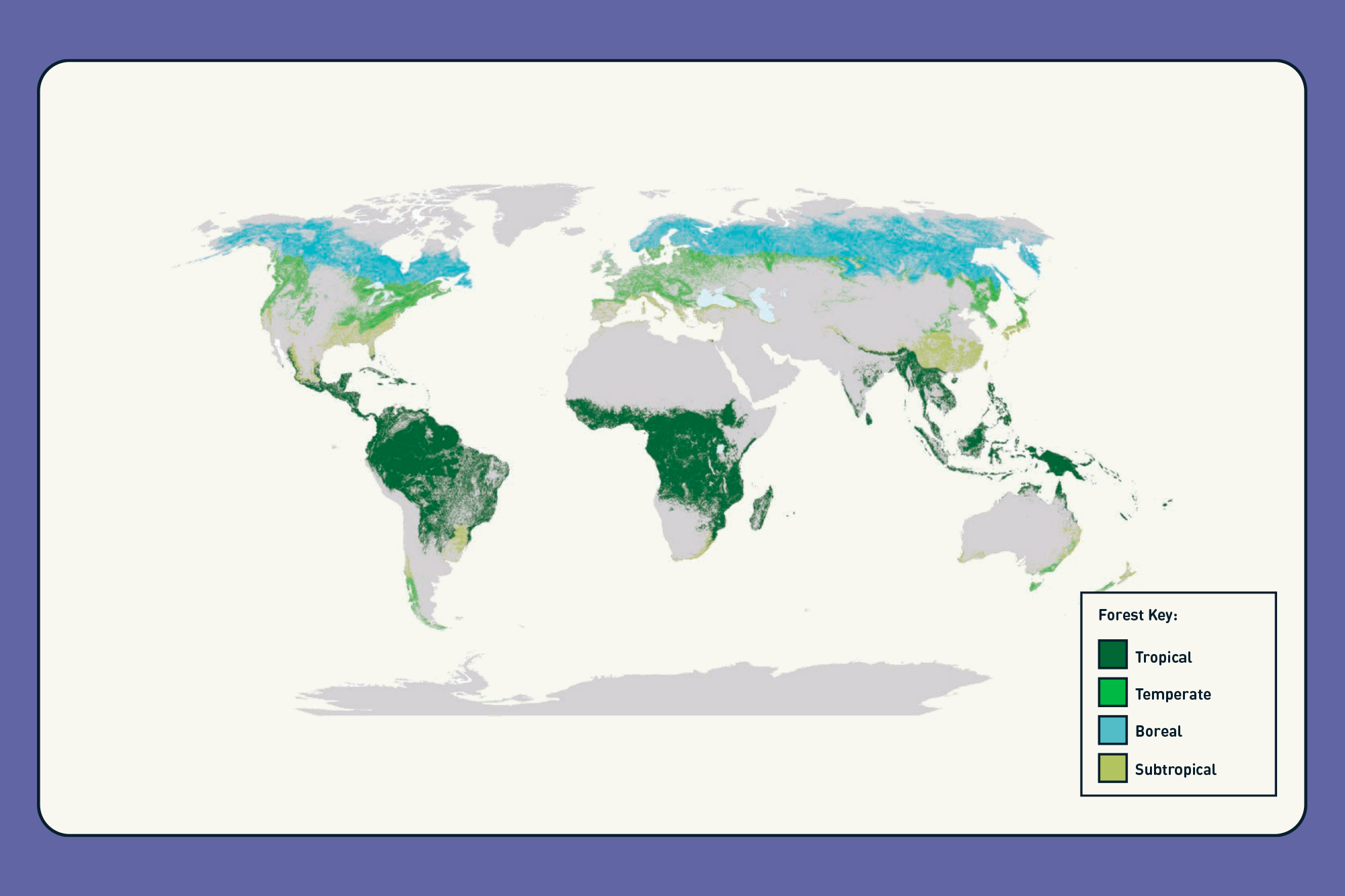 How does a forest ecosystem work?

A forest ecosystem is more than the sum of its trees – it’s a highly complex community of plants, animals and microorganisms supporting, competing and interacting with each other and their landscape and climate.

The organisms or living parts that make up a forest ecosystem are interdependent on one another for survival and can be broadly classified according to their ecological roles as producers, consumers and decomposers. These communities interact with each other and with the non-living parts through several naturally occurring processes termed “ecosystem processes”, which include the energy cycle, water cycle, nutrient cycle and community dynamics.

The energy cycle or food web best highlights how the living parts of an ecosystem interact with each other. Producers are organisms that can manufacture their own energy from solar inputs, such as the sun. So trees and other green plants are producers, eaten by primary consumers to gain energy. The primary consumers are then eaten by secondary consumers, and tertiary consumers feed on both. The decomposers of the forest ecosystem break down dead plants and animals, returning the nutrients to the soil to be made usable by the producers in the nutrient cycle.

However, it’s not quite as simple as primary consumers feeding on producers. Often in this interaction, another exchange takes place. For example, in a rainforest, pollinators feed on the nectar and pollen of flowers, but in doing so, this allows fertilisation to happen between plants. Monkeys, bats and other animals may munch on the fruits of producers, but this allows the trees and plants to spread their seeds more effectively.

The nutrient cycle not only spotlights how the living parts of an ecosystem interact but how the non-living components filter in as well. Nutrients dissolved in rain collect in the litter on the forest floor. Nutrients from the biomass of decaying plants and animals also collect on the forest floor, all to be decomposed by organisms in the soil food web. Fungi and bacteria in the soil food web also break down rocks and then makes all these vitamins and minerals available for plants to use for energy. The cycle begins again. 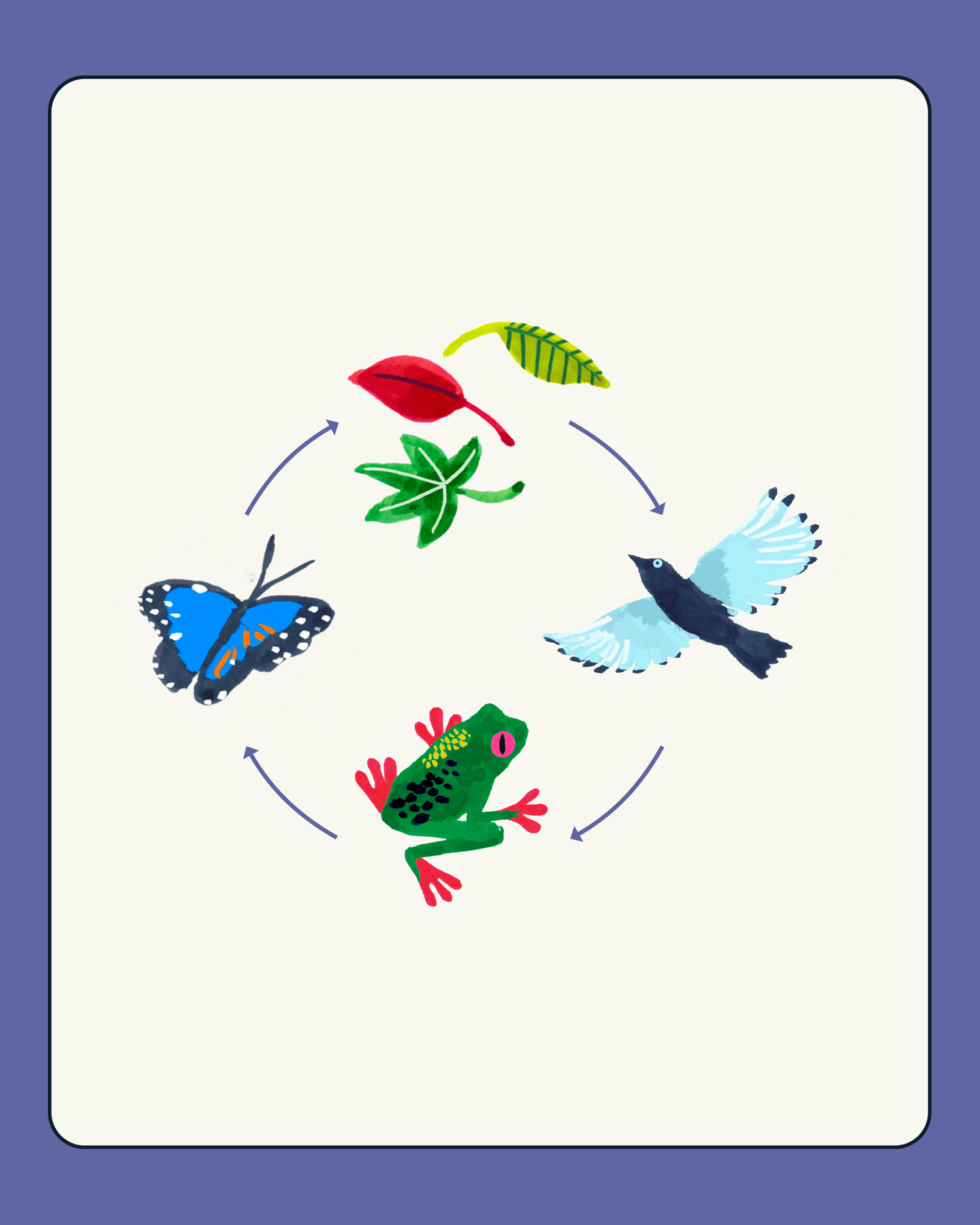 In a tropical rainforest, the nutrients are rapidly recycled as a moist and warm climate provides the ideal condition for decomposers to break down organic matter. This climate also means plants drop their leaves all year round, which enables a constant leaf litter. This is needed because heavy rainfall constantly causes run-off and the leaching of nutrients. As a result, trees grow wide rather than deep so as to access the top layer of soil. This is a clear example of an ecosystem at work, where the living parts have adapted to and are therefore dependent on the non-living parts of this geographical area and are working together in a self-sustaining bubble of life. 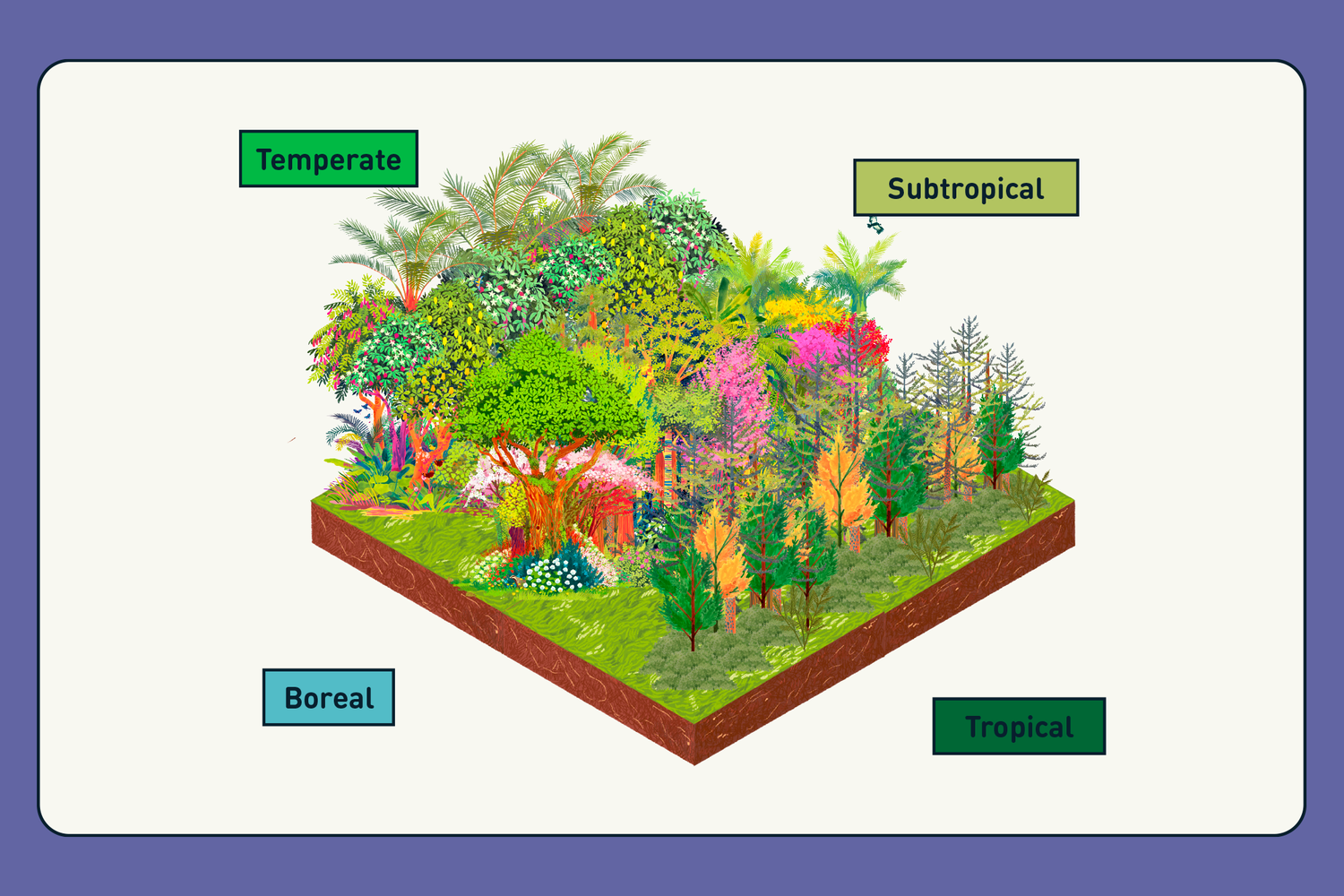 Are forest ecosystems under threat?

The communities within ecosystems work together through these ecosystem processes to make the conditions they need to thrive. As humans are part of ecosystems, this includes creating the things we need to survive.

Therefore, forest ecosystems provide a variety of ecosystem services, from the production of food, medicine and shelter, to regulating and influencing local and regional climates, storing atmospheric carbon, reducing soil erosion, purifying and managing water and mitigating floods and drought. If you damage forest ecosystems, the less likely they are to be able to perform these services.

While forests can help to combat climate change, they’re also highly vulnerable to climate change. As the PEFC reports, the climate at a given location determines the type of forest that can become established. When climate conditions change, forests must adapt. However, the adaption process requires more time than the changing climate conditions allow. This often results in the loss of forests, damaged ecosystems, a reduction in biodiversity and their ability to mitigate the impacts of climate change.

Forest ecosystems are under threat due to climate change, deforestation, the replacement of forests with monoculture plantations, the conversion of forests to agricultural land, overgrazing, unsustainable forest management, the loss of biodiversity, and the introduction of invasive species, pollution, and mining and oil exploitation. 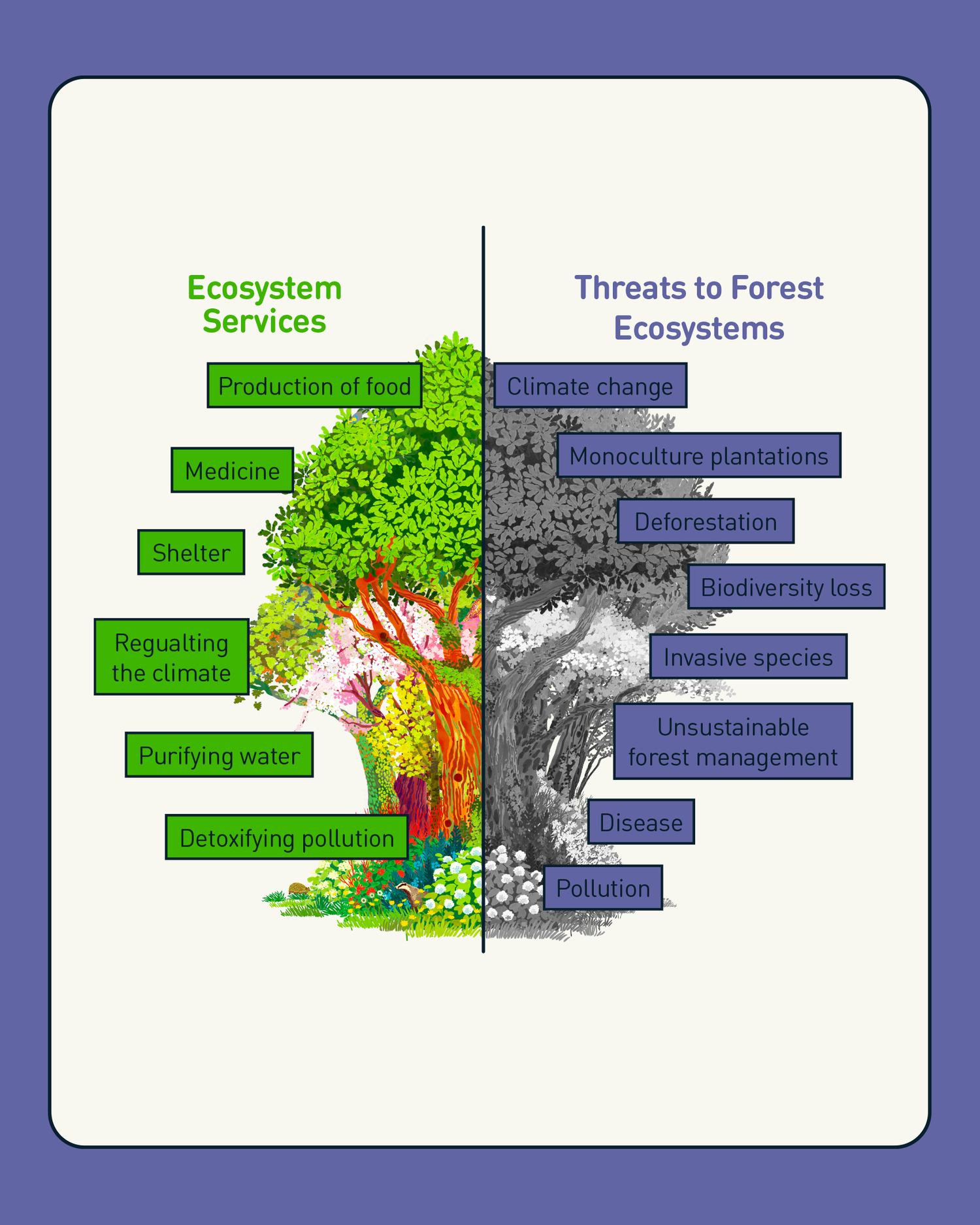 How does the Miyawaki Method create ecosystems?

SUGi understands that when you plant a forest, you want to create the conditions for ecosystems to thrive, and “that means creating an environment that helps support a diversity of life,” explains SUGi forest maker, Ethan Bryson. “The Miyawaki Method is an effective tool at accelerating the creation of ecosystems.”

The Miyawaki Method acts as a turbo-booster for ecosystem creation by mirroring and accelerating what nature would do in that geographical area if it were to recolonise itself. 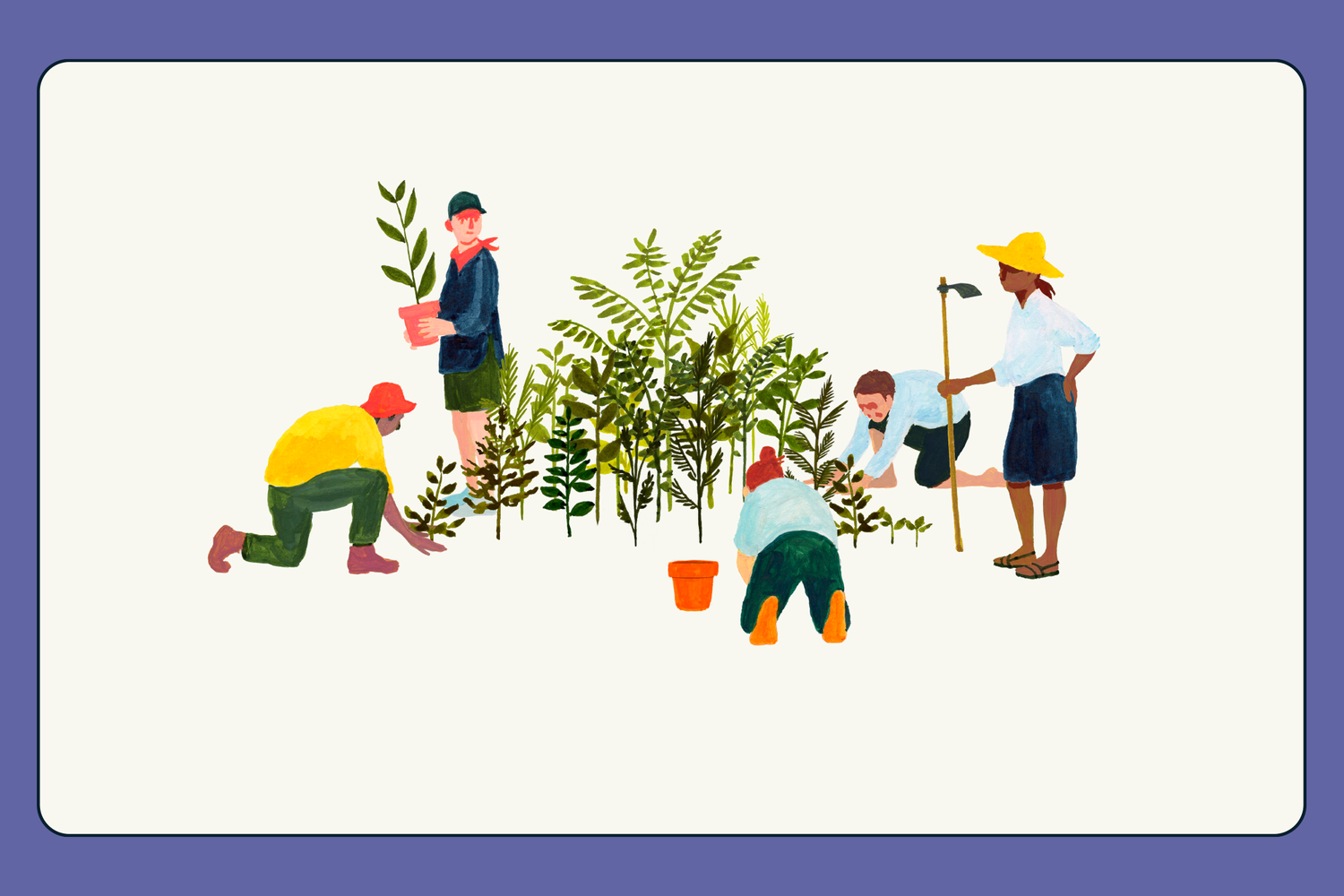 For optimum biodiversity, the Miyawaki Method only uses plants that are indigenous and suitable for the location in which they’re being planted. Indigenous plant species have spent thousands of years adapting to their local environment to create an ecosystem that supports a variety of life; non-native species have not. Native trees are able to build biodiversity and create an ecosystem that’ll be more responsive to climate disasters and better able to perform ecosystem services.

To build a stable ecosystem, you need to build biodiversity. “Old-growth forests never require fertiliser, pesticides or herbicides to grow strong,” explains Ethan. Trees get their nutrients from the nutrient cycle enabled by a thriving ecosystem and the interactions between a diverse soil food web. The second stage of the Miyawaki Method restores the missing biology to the soil and puts it on the path to becoming oxygenated, fertile and self-sustaining. All the inputs in this method are organic.

Maximum diversity is also achieved by the planting of a dense number of diverse species from the different forest layers. More diversity leads to more habitats, increased biodiversity and a stronger ecosystem. 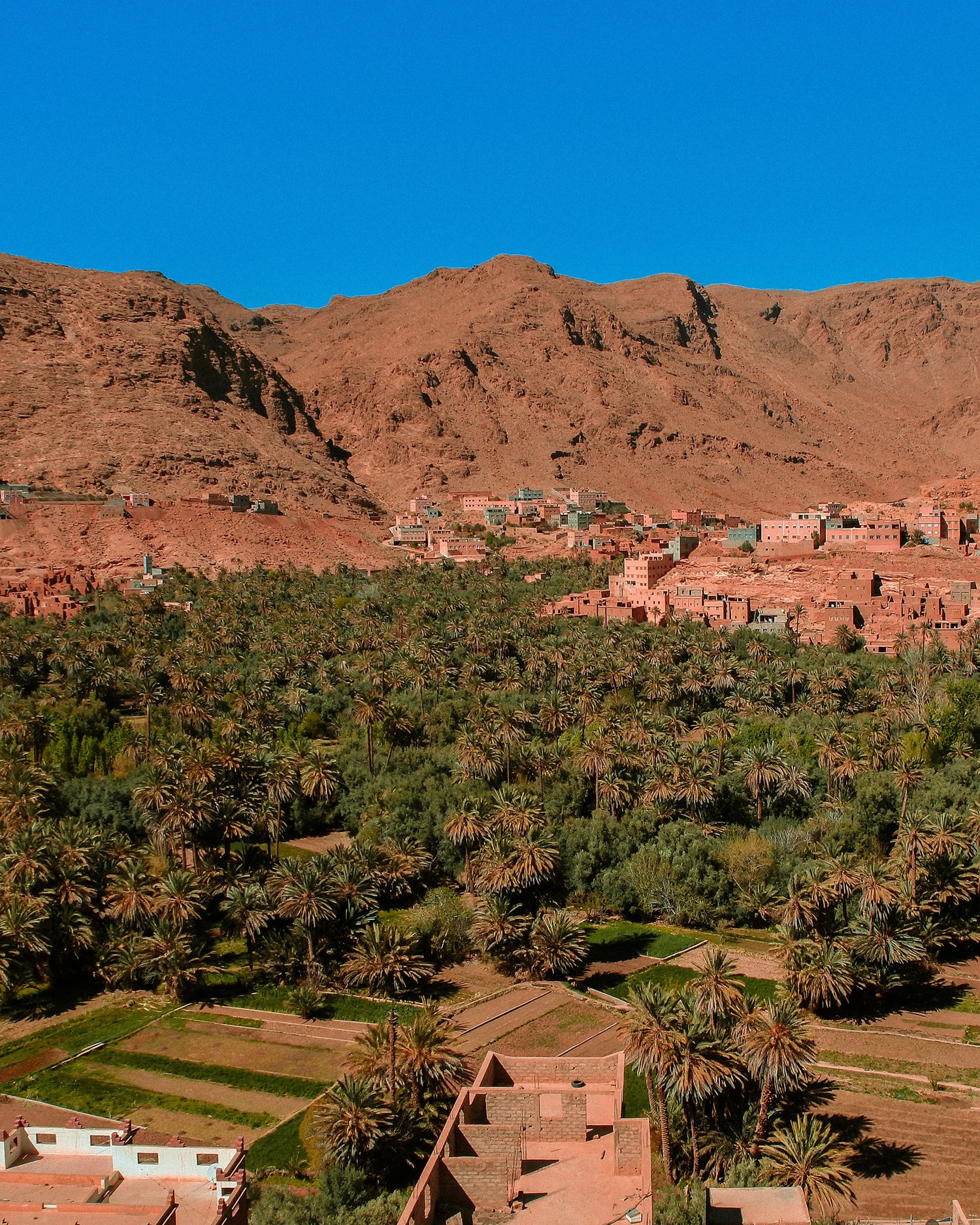 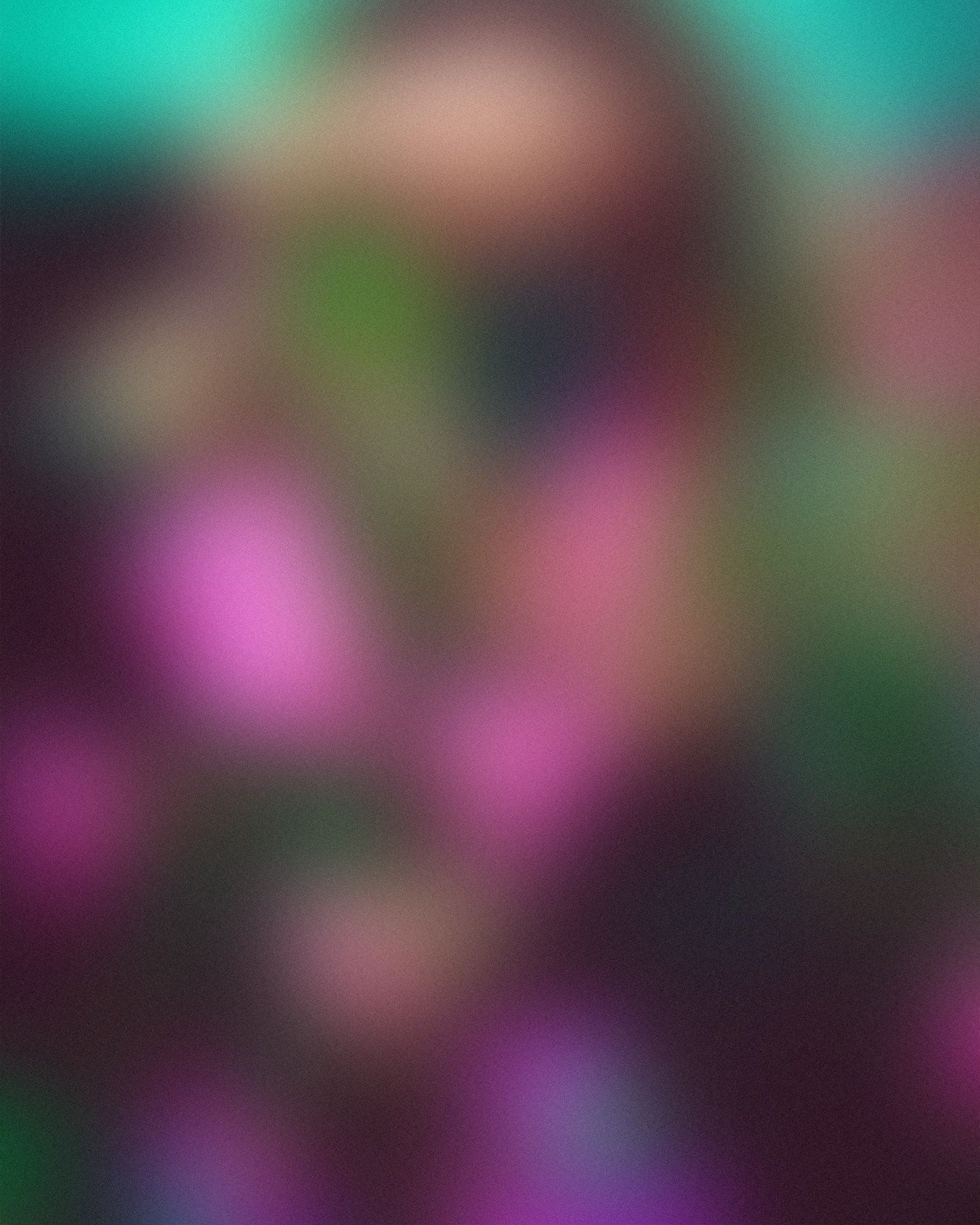 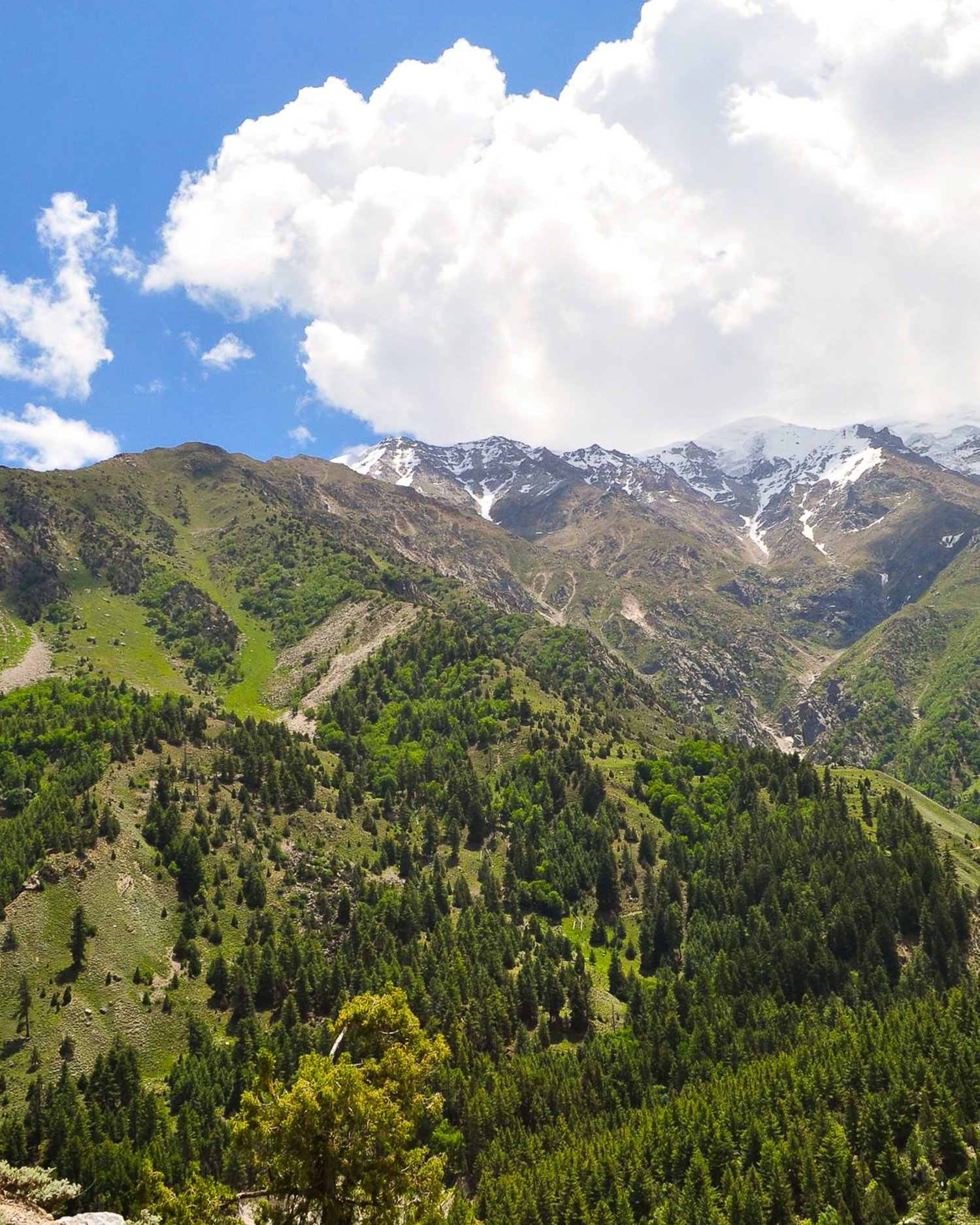